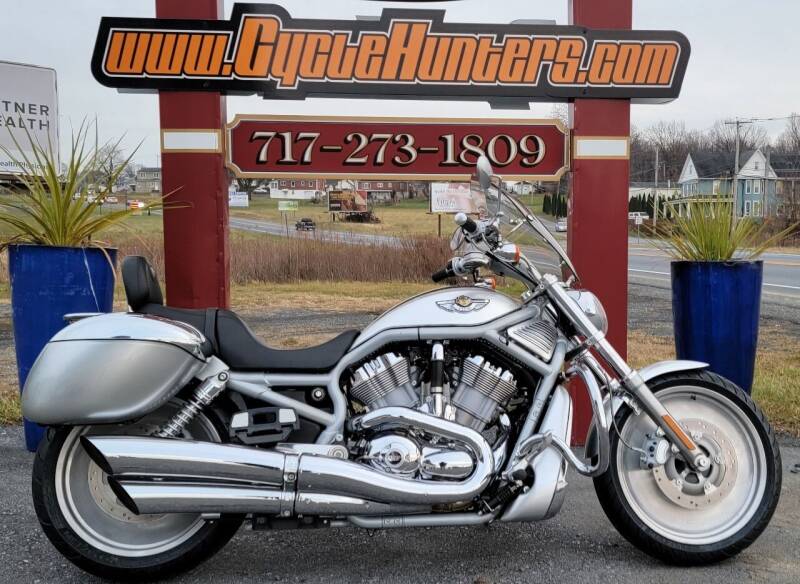 Ready to trade in?
Let us know what you have.
Have additional questions?
Give us a call and we'd be happy to help!

Introduced in the 2002 model line-up, the V-Rod motorcycle represents the first member of a new family of Harley-Davidson motorcycles – the performance custom. A tightly refined package of pure custom Harley-Davidson style and attitude backed with the performance of the liquid-cooled, 60-degree, Revolution engine, the V-Rod plays to your senses and your soul. A silky Smooth gear box is something unlike Harley due to the fact that this is a Porsche designed motor. Thus making this bike a really great cruiser and daily rider. The Revolution engine is very similar in principle to the VR 1000 engine, using an intermediate shaft in the valley between the cylinders to drive the water pump and four cams via chains. In the V-Rod, those chains have hydraulic tensioners (as in a Boxster engine) instead of manual adjusters. By stroking the crank to 2.83 inches and boring the cylinders to 3.94 inches, the engine's displacement was increased from 996cc to 1131cc. All the engine's dimensional changes were based on Harley-Davidson's modeling, and all spark and fuel mapping was handled in-house. Final tuning was done on a back-and-forth operation, and Porsche's participation was primarily focused on durability issues, as well as input into the liquid-cooling system. The result is performance of a wholly contemporary kind. Although the exhaust note still reflects the slightly uneven firing order of a V-twin, even this is not similar to the company's air-cooled models. In another big departure from the usual Harley practice, the V-Rod has two tuned downdraft induction stacks between the vee, and these protrude upward into an airbox where one would normally find a fuel tank. Thus, the V-Rod has a dummy fuel tank, sans fuel-filler cap, and actually stores its fuel in a container beneath the seat. To fill up, you flip the seat on a hinge and then watch the reactions of people around you. The VRod sadly was discontinued in 2017 so that makes these bikes a bit more rare every day. And for the 100th Anniversary, especially with such low miles, it is even more rare and desireable. This bike is all stock except for the aftermarket hardmount saddle bags, windscreen and highway bars. Like all our bikes this will be fully serviced, inspected and detailed at the time you take delivery. See this and other great deals at www.cyclehunters.com HaldemanAuto/cyclehunters.com 102 Old ebenezer Rd Lebanon Pa, 17046 717-273-1809

By placing this call you agree to the Terms and Conditions of Use of this website and that this call may be recorded by Haldeman Auto, using technology powered by Carsforsale.com, for business purposes.

By placing this call you agree to the Terms and Conditions of Use of this website and that this call may be recorded by Haldeman Auto, using technology powered by Carsforsale.com, for business purposes.