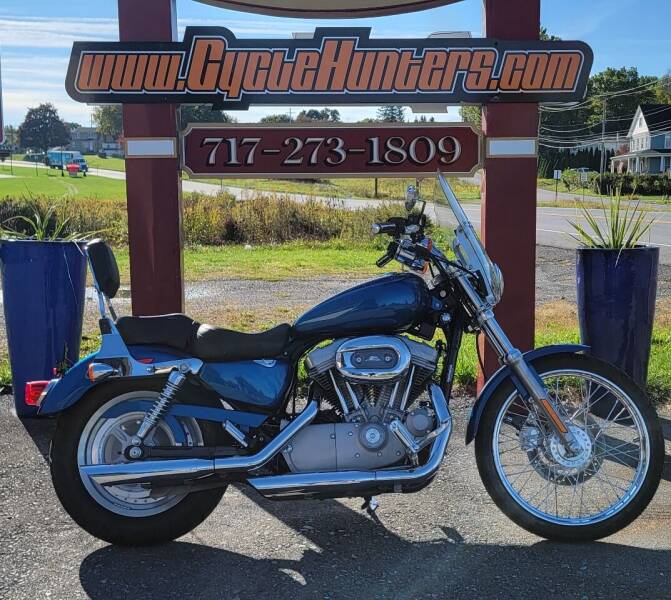 Affordable, sensible, fun, easy to ride, learning bike are all terms used to define the Harley-Davidson XL883c. This is a bike that is easily used as an every day rider. Its rubber-mounted XL Evolution 883 engine delivers smooth power for easy get-aways and a vibration-free ride at highways speeds. With the engine’s signature shaking damped out with the rubber-mounting, the one aspect of the Sportster that stands out is the fact that this reborn 883 is a peppy little son of gun. On the road, a twist of the throttle elicits a surprisingly quick and torquey response from the Sportster. It’s certainly not overwhelming power, but for the real world it allows for easy passing and is beefy and capable enough to get more than a fistful of tickets. The 883cc Twin is nested in a tubular steel frame that Harley claims is 24% stiffer than previous, thanks in large part to three stabilizer links that secure the engine to the frame. Further improving the rigidity is a larger backbone tube. The improved chassis pays dividends on the road where the bike is smoother, but the extra weight of the new frame makes it feel a bit less crisp than before. Ergonomically, the new Sportster is surprisingly comfortable. As with previous generations our Sporster offers a seat height of 27.3 inches, but for some it just wasn’t low enough. H-D has improved their standing with the vertically challenged thanks to the introduction of the 883 Low model, which rests at a diminutive 26.0 inches. That allows for even the shortest riders to rest flat footed at stoplights. This bike like all our bikes will be fully serviced, inspected and detailed at the time you take delivery. See this and other great deals at www.cyclehunters.com HaldemanAuto/cyclehunters.com 102 Old Ebenezer Rd Lebanon Pa, 17046 717-273-1809